NDepends... or How to pass your code quality audit ?

If you belong to a large organization, when developing an application, you might have to go through a code quality audit, done by a third party company that has the power to say 'Go' or 'No go', and provide advices if not good.

As far as I am concerned, I appreciate it because it forces us to care even more about code Quality and maintainability (which includes security, performance, Design...). Maintainability is particularly important because once in production, the Dev team will hand-over their code to the Maintenance Team.

Because such audit consists in watching numerous aspects, it all brings me back to an old post of mine listing the number of rules that FxCop and StyleCop monitors. Where the various rules are grouped into  the following categories :

FxCop (or its variation integrated within Visual Studio called Code Analysis, or CA, that compiles your code then analyse it):
StyleCop (or Source Analysis)
It totals about 400 rules. After having enforced most of them on various projects, it can be noticed the following pattern:

Now that you've reached step 5, what should you do about the external audit that has been enforced by your sponsors or the Quality Management team ?


It's where NDepends enters into play ! It's a software that I have been using for nearly 10 years, written by Patrick Smacchia (author of books and blog dedicated to .Net, C# and Code Quality).

As far as we are concerned, the auditor came in and has inspected meticulously all aspects of our projects technically (the audit consisting in evaluating our Agility/Scrum process was done by another company) :

One snapshot will not be sufficient, because it's only when you can play visually with your code through Drill-Down (up until the exact line of code) that you could understand its power.

You have to "feed" NDepend with as much info as you can (*.Sln, *.csproj, DLLs, PDB, ...) in a Drag & Drop manner, then it could "answer" many of your technical questions concerning your projects.

Indeed, for me it considers your "project" (Source Code, PDB, DLLs, previous version of your source code, new code, ...) as a LARGE database, wich MANY different views (too much to fit in a single Snap shoot): 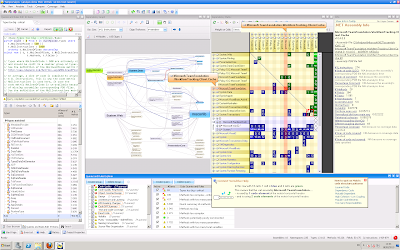 where you could :
Simple example: 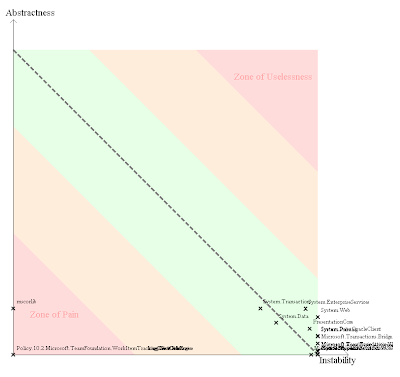 Having a professional auditor in front of us, it took him only 1 day to decompose our work and start providing us feedback. Within this very same time, he managed to better understand part of our code than our developers ! To do so, he used many tools ... including one called ... NDepend !

After having eliminated many "false positive" (since he does not know the context of our project), we managed to pass our audit with success and excellent grades !