Now you are Agile, what next ? Lets consider Transactional Analysis (French: Analyse Transactionnelle)


I wanted to have a quick post on Transactional Analysis, which is a  psychology/psychotherapy discipline I heard about for years, mainly influenced by Freud, but I never had the chance to investigate into. Well not until tonight.

Scrum / Agile / XP ... has got some set of tools defined (daily stand up, iterations, scrum cards, ...). But those are only recipe. However, as opposed to traditional V-Cycle / Waterfall / PRINCE2, those basic tools are not enough to succeed in a project. What is required then is the soul and the conviction to improve yourself and the team ?

Once you've also got the soul in place, to best achieve some improvements, you now have to
- analyse patterns of success using Scrum Patterns, or in fact more precisely patterns of failure so that you don't do them, or so that you identify them and get rid of them:  http://en.wikipedia.org/wiki/Scrum_pattern (definition that I have initiated by the way)
- consider Dev’s team communication, but also the entire human interaction within the company.

That’s where soft skills tools comes into play, where 2+2 is not necessarily 4, as opposed to computing (except in some cases geeks would say), but it only depends on many external parameters that we have to understand.

Transactional Analysis as one of them, but let also mention Neuro linguistic programming (aka NLP, PNL in French), and a more “simplistic one” is the PCM©, Process Communication Management©)
http://en.wikipedia.org/wiki/Transactional_analysis

A French book that I would recommend, is “L’analyse Transactionnelle” René de Lassus © MARABOUT 1991, that I wish to quote 1 page (at the end), that is not meant to summarize the technique, but rather it means to me SOOOOO much in understanding my environment.

Also consider having a look at PCM© as it is an even easier principle to understand, but as any soft skills, requires lots of practices and training.

Obviously, even if you are not Agile, those techniques are also useful to understand hunain's interactions !! 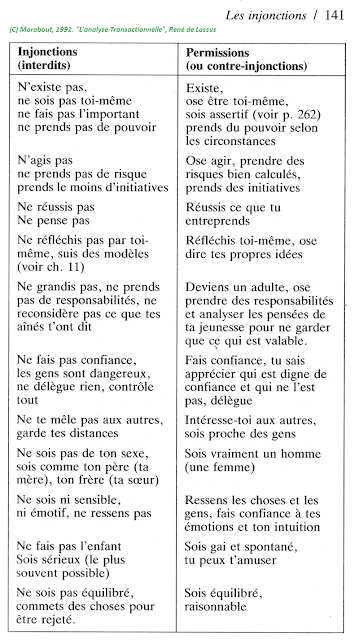