Microsoft has released the new version of a virtual machine with a entire ALM environment (TFS 2010 + VS 2010 Ultimate + tutorials), in trial version until June 1, 2011.
You'll be able to really learn and experiment advanced functionalities

How to use it (and links to download other types of VPC, such as Hyper-V):
http://blogs.msdn.com/b/briankel/archive/2010/06/25/now-available-visual-studio-2010-rtm-virtual-machine-with-sample-data-and-hands-on-labs.aspx

By the way, also try the "TFS Integration Platform" from CodePlex to extend the power of TFS outside its traditional usage.

PS : And for the fun, here is Visual Studio ALM Ranger Projects Scrum Guide.... Personally, I found it interesting but REALLY scary at first sight, despite the fact that I have been using TFS for the last 3 years, with Agile, and recently Scrum for about a year !! 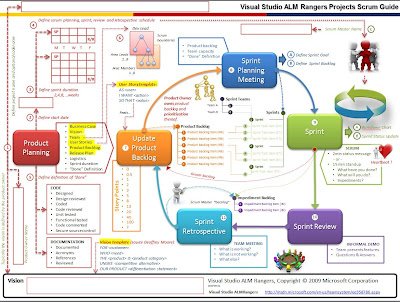