How to automatically deploy, once Gated checked-in

Solution 1 : Based on Web deploy package
* Create a Web deploy package
* Add extra MSBuild parameters onto the BuildDefinition (such as  /p:CreatePackageOnPublish=true /p:DeployOnBuild=true)
http://www.codewrecks.com/blog/index.php/2010/06/07/create-web-deploy-package-during-a-tfs-2010-build/
and http://weblogs.asp.net/jdanforth/archive/2010/04/24/package-and-publish-web-sites-with-tfs-2010-build-server.aspx
or http://publicityson.blogspot.com/2010/11/tfs-2010-build-and-deploy-with-web.html

Then, once you run and passed the Gated Check-in (or in fact, any TFS Build), you will find all the codes be be installed in the TFS "Drop folder". 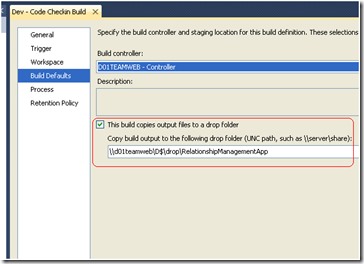 Solution 2 : Run a Batch file with the Build definition Workflow :
To do so, you have to use InvokeProcess activity with the Workflow TFS 2010 - how to execute a batch file after build
For more details, see my other post : http://memoprojects.blogspot.com/2010/12/create-custom-workflow-for-tfs-2010.html

Solution 3 : A more "industrialized way" is to use WIX to generate your MSI
First, we have to understand how it works (Ewald Hofman is MVP VS ALM) before specifically use WIX.

Then, you should understand MSBuild ; here are the basics from the MSDN : "Compile Apps Your Way With Custom Tasks For The Microsoft Build Engine"

Note: Here is a Hello World that will launch Notepad with a new HelloWorld.txt file after the Build,
we first start to create a MSBuild project, for instance mySmallProject.csproj

Then the command line :
msbuild.exe mySmallProject.csproj /t:Build
will build and at the end, it will open your NotePad !

Solution 4: Use TFS Deploy
http://tfsdeployer.codeplex.com/ but this project has only 140 downloads as per today (dec 2010).

How to manage Build increments with TFS 2010

Else, you could use MSBuild 4.0 to do so :
http://www.wintellect.com/CS/blogs/jrobbins/archive/2009/11/09/tfs-2010-build-number-and-assembly-file-versions-completely-in-sync-with-only-msbuild-4-0.aspx

In all cases, a good idea is to rely on CodePlex, such as an MSBuild Extension to ease your life:
http://www.msbuildextensionpack.com/

Ever wanted to find out who is using TFS 2010, and in which context ?? 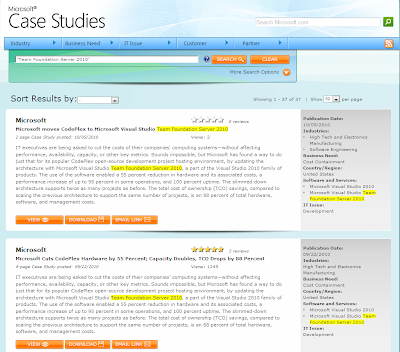 First attempts with CodedUITests with Silverlight 4

In fact my really first attempt with Coded UI was in Dec 2009
http://memoprojects.blogspot.com/2009/12/silverlight-and-microsoft-test-and-lab.html, but, back then, I had  a nice message "Microsoft Silverlight is not supported.. Test paused.".
On the 15th Nov 2010, Microsoft has released VS2010 Feature Pack 2, and I was waiting for a while for it. Now I tried it on our complex Silverlight 4 LOB Application.

However, no Silverlight controls were detected. "Verify that the application under test is built using Silverlight assemblies with a version 4.0 or greater and that a reference to the Microsoft.VisualStudio.TestTools.UITest.Extension.SilverlightUIAutomationHelper.dll assembly has been added to the project".

So you'll have to read http://msdn.microsoft.com/en-us/library/gg413374.aspx
and add the missing DLL : Microsoft.VisualStudio.TestTools.UITest.Extension.SilverlightUIAutomationHelper.dll
I was just used to use HP QTP to perform the tests, for which it requires no modification of our application (i.e. no need to add any additional DLLs on our projet - that you have to use a switch mechanism so that they are not released in the production environment ! ).


If you don't add the extra MS DLLs, your Coded UI Test Builder will be empty, even if you click like crazy on your Silverlight application : 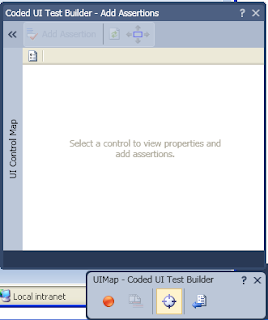 After having inserted the DLL on ALL our composite view projects (because of MVVM et PRISM), I ran it again... but still the same problem. Then, I tried to add the DLL only to one project : Still not working.
==> I'll have to try it on a tiny project first.
2/ My second try was on a small Business project :
Seams to work fine and to record... up until the point when I click on "Generate Code"

At that point, my Visual Studio was in debug mode, and I had the nice popup :
"cannot generate code because you are in debug mode" !! 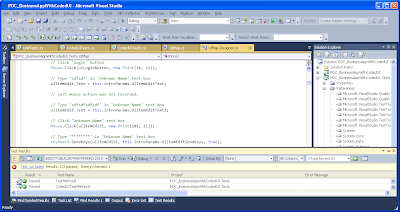 5/ My second trial : Remove all references to the DLL, excet for 1 project in our MVVM PRISM4 project (i.e. I can record only one screen)


First crash : The Coded UI Test Builder requires me to use a 100% Zoom scale for my IE browser. Else, you'll have this warning "Windows Enternet Explorer zoom setting must be set to 100%. Please change the value to 100% and try again.", 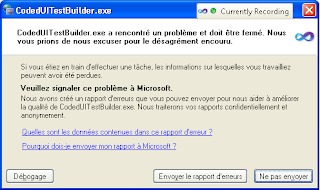 Restart again, then the recording FINALLY works !!
However, I never managed to record again (even after a reboot).
Enough for today ! I'll try again another day... hence back to TELERIK WebUI Test Studio et HP QuickTestPro (that requires no additional DLLs on our project to make it work) ;-)
Note : I tried coded UI on the Windows calculator (calc.exe) : no problems. Then I started to use it for "a real need", such as with "SQL Server Management Studio" within wizzard to generate T-SQL Scripts. It works nearly properly : No errors during the recording, but a mini problems do not allow me to use it to "Run" afterwards. Indeed, it stops the playback when dealing with some Drop Down List (although with some DDLst on other windows it works).
Posted by thavo at 11/16/2010 05:36:00 PM No comments:

How to bootstrap an ISV startup from scratch

If this is your case, find some readings here :

* Get into the cloud with :
. Microsoft Office 365 : http://office365.microsoft.com/en-US/online-services.aspx

or in French here : http://blogs.codes-sources.com/vlabz/archive/2010/10/29/team-foundation-server-dans-azure-de-nouvelles-perspectives.aspx